We’ve watched the tornados whip through Moore, Oklahoma, and hear

d the stories, saw the tears, perhaps shed a few tears of our own and donated money or prayed for the victims.  My heart sunk when I saw that an entire elementary school sat in the center of what is dubbed as “Tornado Alley” but did not prepare its property with storm shelters.  I’m sure that I am one of millions who grieved over 24 lives lost and especially children who died because they simply had no place to go.

Last week I sent a series of blogs on peace.  I did that on purpose because I personally needed peace these last few months and, more importantly, I am one of many Christians who senses we are about to enter difficult times in our nation.

We see the lack of compassion from those in our government who were responsible for the Benghazi cover up.  (If our eyes and ears are open, we’re seeing much more in Washington, DC).

If I was allowed to choose my president/leader from all the government leaders in the world, I’d choose Benjamin Netanyahu, Prime Minister of Israel.

But more importantly, PM Netanyahu CARES about his people.  He’s not worried about scaring the citizens of Israel, he’s more worried about protecting them!  He’s not doing the dance of political correctness, he’s speaking to generals, nuclear scientists, and advisors who know the Middle East terrain.

PLEASE READ THIS!  Prime Minister Netanyahu recently ordered personal
protection kits, which include gas masks, for all Israelis, Elad Benari of Israel
National News (INN) reports.   Even though it will cost the government the equivalent of about $350 million US Dollars to put these kits into the hands of every Israeli, PM Netanyahu sees the value in his people.  Jesus said, “Where your money is, there your heart will be also.”  (Where is our government putting its money?  Enough said.) 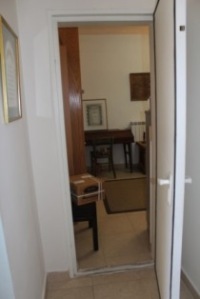 I received a prayer update from a couple in Jerusalem named Martin and Norma, which shows this sealed room with reinforced walls, a requirement for new apartments built in Israel.  Martin writes, “The boxes on the stool at the entrance contain gas masks, and injections for use in case of the release of nerve gas in a missile attack. On the box is the simple designation in Hebrew, “Defense Kit”. Within the room are also water supplies, and a radio with which to monitor for the ‘all clear’ signal.”

So here are two reports from two different sources about these defense or protection kits distributed in Israel.  Another Israeli Christian sent out an email to his friends in America and said he is stunned that US citizens are not preparing for a possible strike.

Iranian President Mahmoud Ahmadinejad stood with nuclear weapons plans and publicly called Israel the little satan and the United States the big satan.  Thankfully, Ahmadinejad will be replaced later this month by a newly elected president in Iran.  However, we have no idea what ideals that new president will embrace.  And the nukes are about two months away from being ready to fire.

Israel is threatened right now by radicals on all sides of her borders.  I’m incredibly thankful that, in years past, our nation supported Israel.  As Christians we know that whoever touches Israel, touches God’s heart.  And we pray for the peace of Jerusalem.

But what about Americans?  Do we have “enough sense to come in out of the rain”?  Do we see the signs in the sky, hear reports of tornados and hurricanes, but stubbornly refuse to take shelter?  Or are we wise people, who build our houses on the rock?  Yes, this can be taken in the analogy Christ intended but it can also be applied to our present circumstances.

Here’s the big question:  Are you and your family prepared if military or weather related disaster strikes?

Are you, as a Christian, prepared if religious persecution infiltrates our borders?

Should we prepare?We don’t want to live in fear, but I think it’s worse to live in deception.  What do you think?

About Lift the Cross of Jesus!

My day job is writing--I'm an author and publisher of a number of books. More on that later. But there is nothing of greater importance to me than the early morning hours I spend with the Creator of the Universe. Although He knows everything there is to know, His greatest delight isn't to give us knowledge, but to give us love. My highest joy is to watch the sun rise with notebook in hand and write the words he speaks to my heart. I want to share some of those words with you here . . . words on the cross.
View all posts by Lift the Cross of Jesus! →
This entry was posted in The Cross and the Christian and tagged Benjamin Netanyahu, big satan, Defense Kit, disaster preparedness, emergency preparedness, Iran, little satan, Mahmoud Ahmadinejad, Moore Oklahoma, nuclear weapons, nukes, Prime Minister Netanyahu, religious persecution, Tornado Alley. Bookmark the permalink.

4 Responses to Emergency Preparedness for Americans